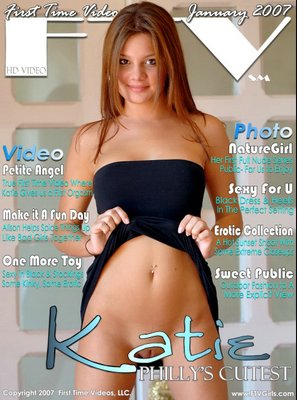 Its by no coincidence that Katie picked out her name for the fact that she looks a lot like the actress Katie Holmes… but probably a lot more sexual as you shall see in the video. Â She and Alison fool around at a restaurant and park, risking it flashing her breasts, then having her dress up in a sexy black dress, and getting caught at a resort! Â She goes home to masturbate using her fingers, and has a nice strong natural orgasm. Â She goes to the dressing room, and tries on several cute lingerie, picking one and ending up on the couch, playing with herself watching TV. Â Alison comes to seduce her, massaging her breasts and together they start feeling each others full breasts. Â Katie picks out a toy, and masturbates again, having another strong(er) orgasm! Â Some extreme closeups of her private parts… later that night, she meets up with Lia, and gives both Lia & Alison a lapdance, then rides a champagne bottle! Â The next day, we see her playing with herself again, then putting on a cute dress to show off and flash in another restaurant and parking area. Â After the security guard tells us to leave, she puts on a very sexy black outfit & stockings, then plays with her hairbrush handle like a toy, and has one last orgasm… falling asleep on the bed.